All That Is Wrong16+
Monologue in chalk 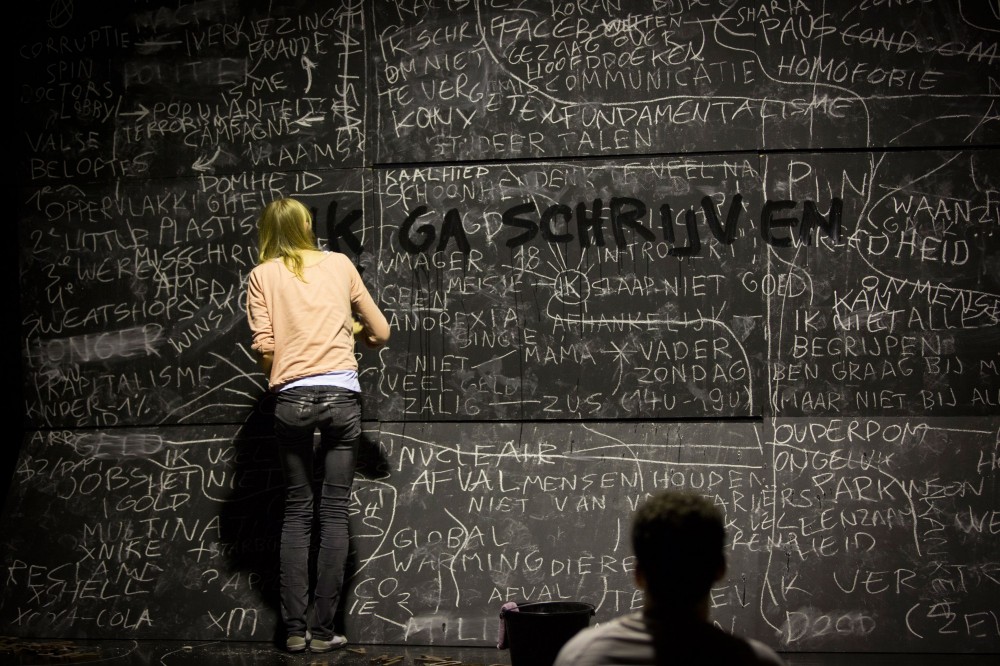 Koba Ryckewaert is now eighteen years old and she knows there is a lot wrong with the world. She just has to get to grips with it. She is better at writing than speaking and this leads to drawing. On the ground. To start with by herself.

Alone, there’s no boyfriend. Loneliness leads to boredom. Boredom which could be solved with money, money for a better computer, for example. But there isn’t any: mother is unemployed because of the recession. What can Koba do to solve the problem? Not a lot, but not nothing either. In All That Is Wrong Koba is on her own. But she makes choices.

Ontroerend Goed and Laika join forces for the first time for this wordless production. All that is wrong will have its première at the Edinburgh Fringe Festival in August 2012 before going on tour in Belgium and abroad. 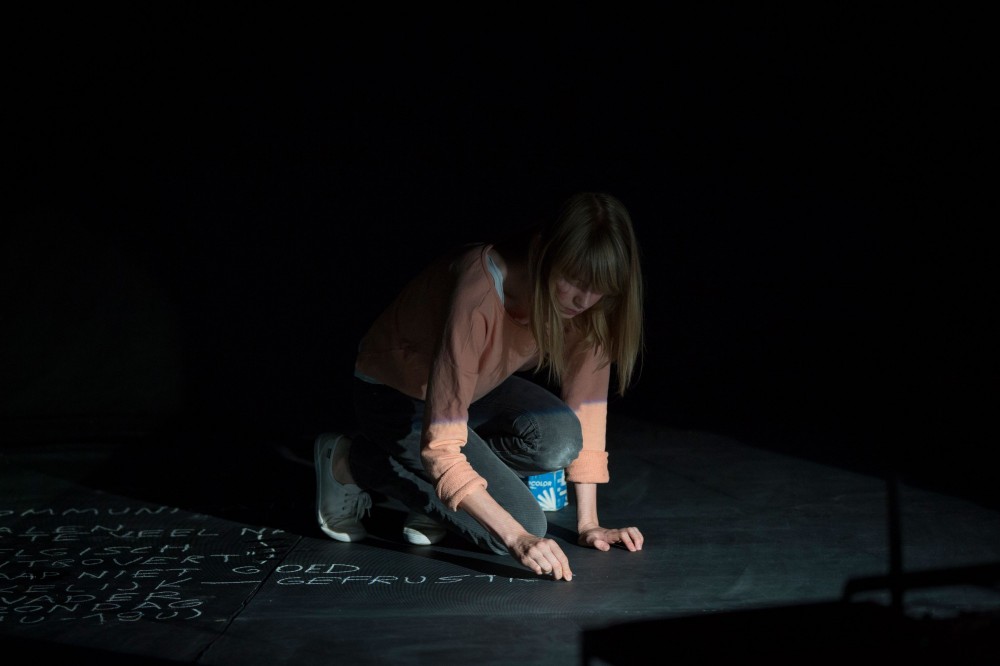 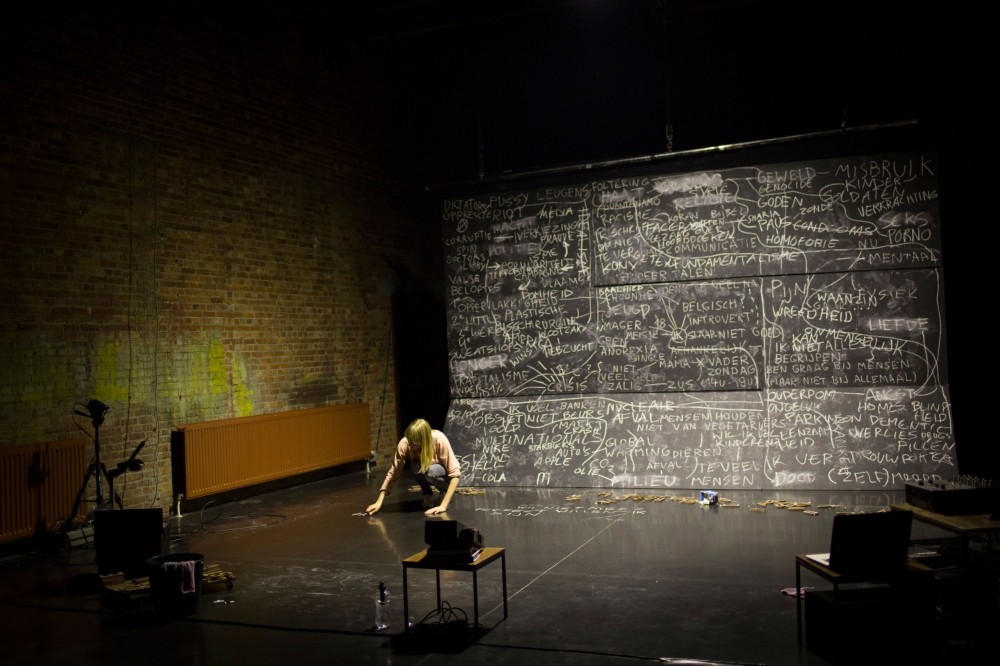 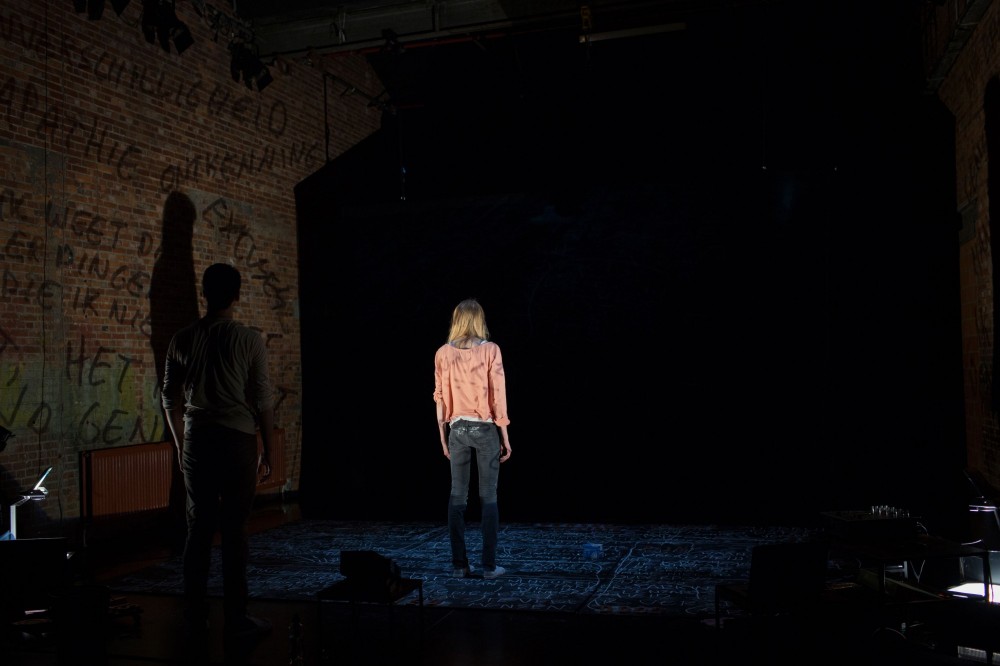 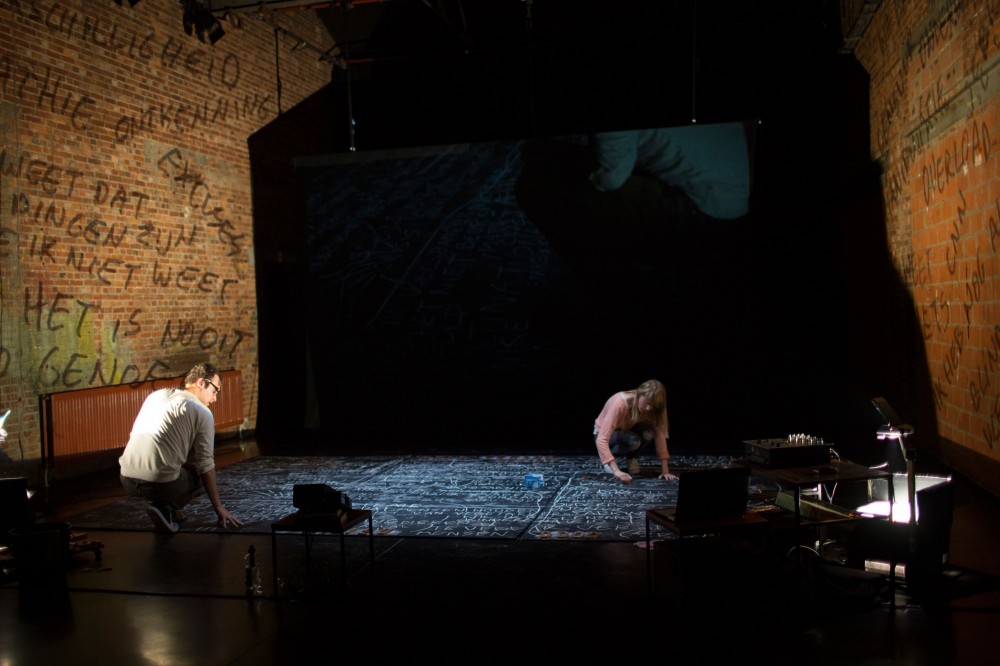 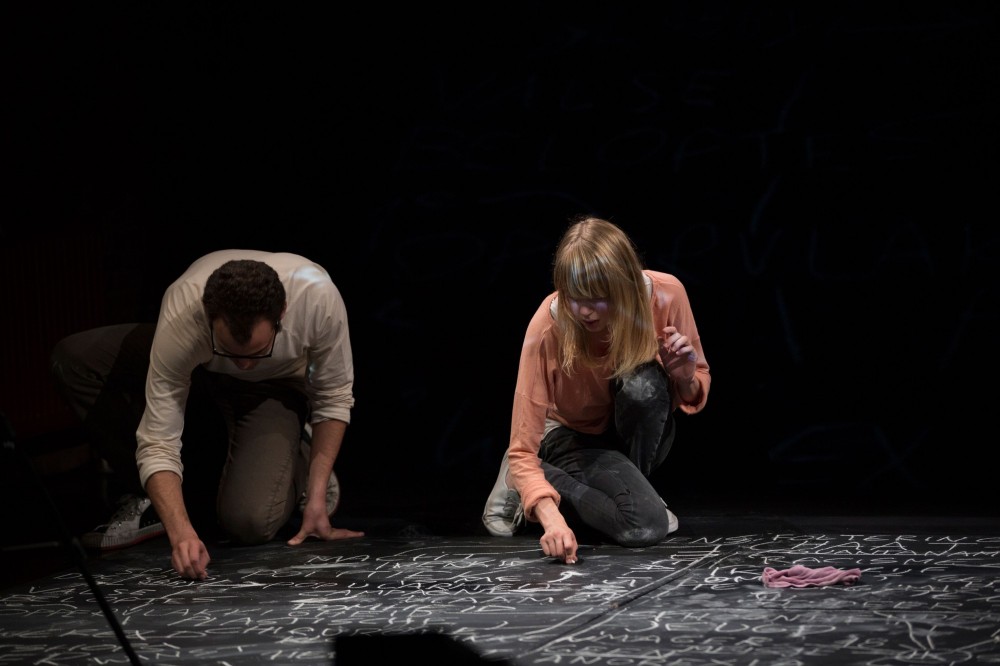 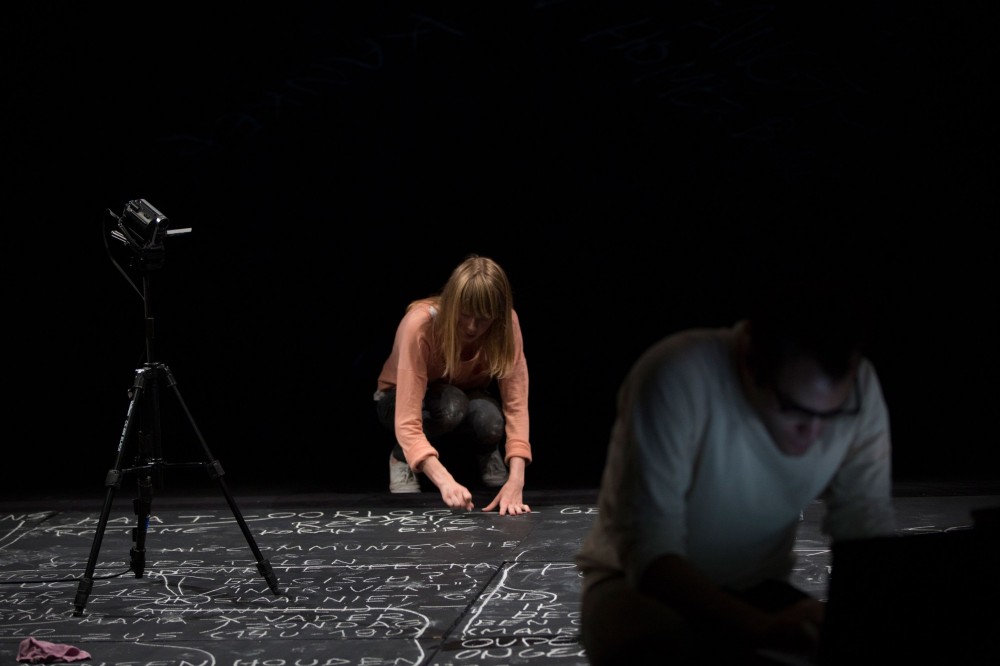 © Ronny Wertelaers
Trailer
August 2012
Edinburgh
The Edinburgh Fringe Festival
Antwerpen
DE Studio
September 2012
Antwerpen
DE Studio
Schaarbeek
GC De Kriekelaar
Frankfurt
Mousonturm
October 2012
Kortrijk
Schouwburg Kortrijk
Hasselt
KC België
Leuven
30CC
Utrecht
Stadsschouwburg
November 2012
Plymouth
Drum Theatre
Aalst
CC De Werf
Groningen
Jonge Harten Festival
December 2012
Antwerpen
Arenbergschouwburg
Genk
C-mine
March 2013
Brescia
Luoghi Comuni Festival
Utrecht
Tweetakt Festival
April 2013
Bern
Auawirleben
May 2013
Bern
Auawirleben
Londen
Unicorn Theatre
June 2013
Wenen
Wiener Festwochen
Novi Sad
Infant Festival
August 2013
Oostende
Theater aan zee
September 2013
Brussel
Theater festival
October 2013
Melbourne
Melbourne Festival
November 2013
Tilburg
De NWE Vorst
Amsterdam
Frascati
Breda
Chassé Theater
Rotterdam
Rotterdamse Schouwburg
Gent
Minard
March 2014
Oldenburg
Oldenburgisches Staatstheater
April 2014
Dresden
Societaetstheater
May 2014
Kopenhagen
Springfestival
December 2016
Antwerpen
DE Studio
February 2017
Gent
Minard
Press
08/05/2013
"a piece of theatre that will be unforgettable, thought-provoking and visually impressive. It is an engaging hour of harsh reality mixed with a glimmer of hope, with Ryckewaert’s simple message – “I will write”."
A Younger Theatre (Chloe Packer)
12/08/2012
"so simple, deceptively slight, yet so far-reaching (...) This isn’t a lecture, it doesn’t have a message: and it yet looks very like the networked future of political theatre: cool, determined and inside the nerve centre of political thought."
exeuntmagazine.com (Daniel B. Yates)
06/08/2012
The energy of youth is poured into a series of shows which have plenty to say, on both a personal and a political level
"It’s hard to say whether Ryckewaert’s show offers a message of hope, or of complete despair. Yet in itself, it’s a near-perfect example of the art that conceals art, beautifully written and thought through, despite its apparent casualness."
Joyce McMillan (Joyce McMillan)
06/08/2012
So wrong it's right All That Is Wrong
"their philosophy of rubbing it all out and starting again is driven home in powerfully mesmeric fashion. (….) As her scrawls become more urgent, it becomes clear this isn’t teenage angst. Rather, this young woman is taking on the world."
Herald Scotland (Neil Cooper)
05/08/2012
"All That is Wrong is a timely piece that ebbs away at you hours after seeing it. It doesn’t offer a provocative stance on the wordt but it commentates in a subdued manner."
A Younger Theatre (Jake Orr)
03/08/2012
"All That Is Wrong is ultimately a piece about writing and about the power of words. We may not be able to understand everything, we may not be able to change everything – but through words we can understand more, change more. Here, writing is a presented as a visceral, physical activity, not merely a cerebral process. "
totaltheatrereview.com (Dorothy Max Prior)
02/08/2012
Ontroerend Goed endure growing pains
"a living demonstration of how the act of writing, creating and describing can offer some sense of meaning; even in the most terrifying times."
The Scotsman (Susan Mansfield)
Poster 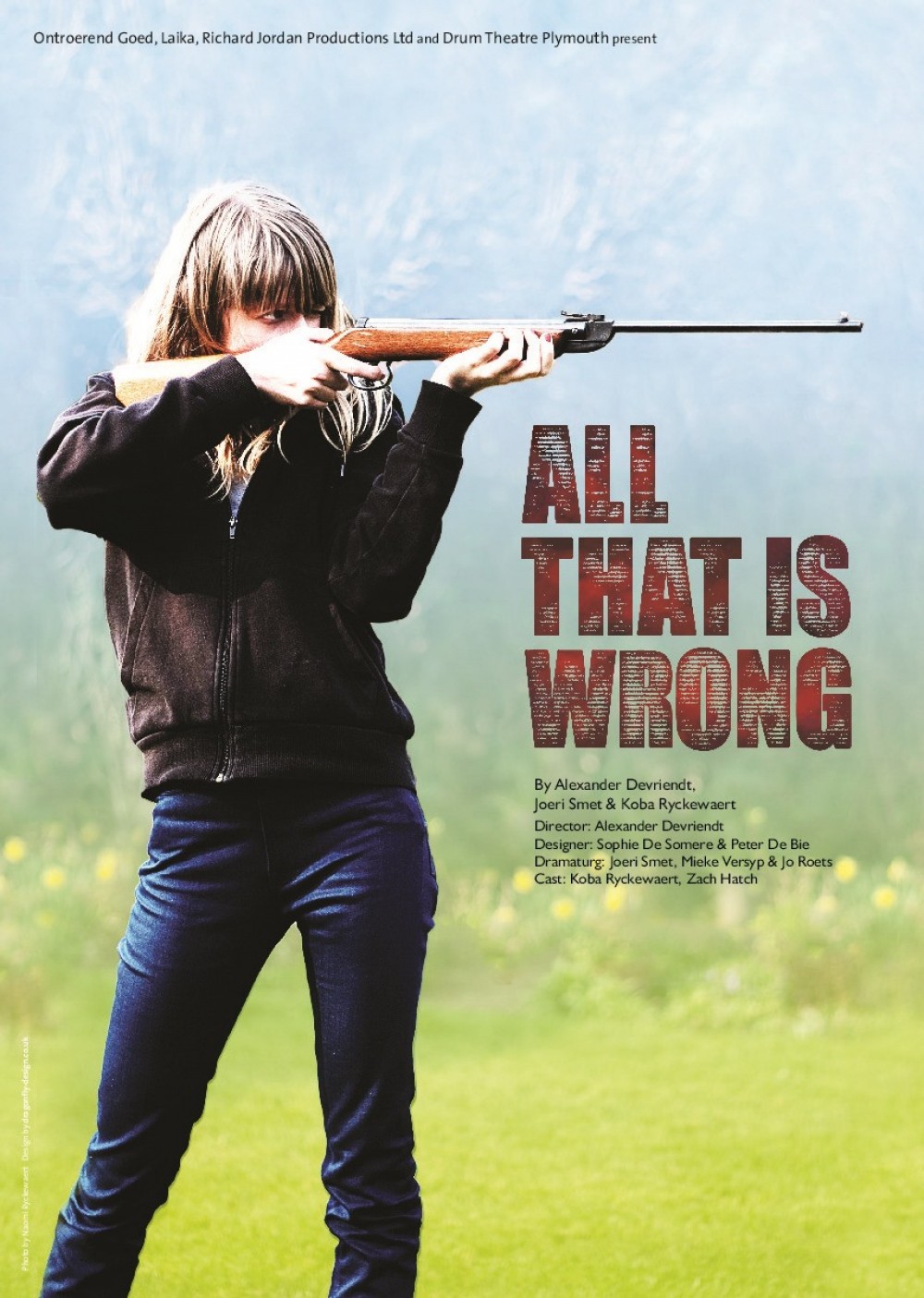